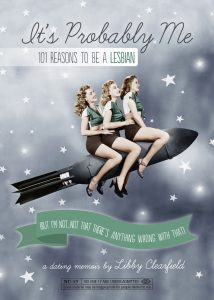 After being vomited on during foreplay, shot in the eye with ejaculate, and slapped in the private parts by a man’s flaccidity, the next logical step seemed to be to write a book about it. It’s Probably Me: 101 Reasons to be a Lesbian (But I’m Not… Not That There’s Anything Wrong With That) is a 90,000-word memoir on dating. Consisting of humorous, heartfelt, and occasionally objectionable stories — of both long and short-term relationships — this book of 101 anecdotal vignettes is an exploration of one person’s quest for love and self-discovery from age 10 to 33.

Similar in composition and subjective style of writing to Eve Ensler’s The Vagina Monologues, each chapter in It’s Probably Me can stand on its own, reading like a choose-your-own-adventure saga with an homage to film. In this sense, each chapter concludes with a moral discovery and provides the reader with a choice of whether to read the next story in chronological order, or one that correlates to the lesson learned (or not learned) about men. Likewise, each chapter is titled with the name of a film that came out in the year the incident occurred, and that somewhat sardonically relates to the events in the narrative. Through this medium, It’s Probably Me fills the neglected niche of non-fiction books about dating by delving between the fine lines of self-deprecation and blame in a unique way, while balancing judgmental condemnation with hopeless romantic introspection, giving it the broadest appeal.

Though completed, It’s Probably Me was never actually published, as the urgency to ‘get the word out’ seemed to fade once Clearfield found herself legitimately in love. Thus, it seems this was more of a therapeutic exercise in self-discovery rather than a catalyst to making her a famously risqué author. But, the hedonistic part of her still wants to mention its existence in the world.